Emmerdale 01/07 - Jai will play dirty to get Archie

Rachel is stressing about the court hearing and takes it out on Sam. Ali has to remind Rachel that Sam is on her side. Later, Sam confides in Tracy about Rachel’s mood but a watching Jai smirks when he sees Tracy giving Sam’s hand a squeeze. When they arrive at the court, Jai goads Rachel telling her Sam was all over Tracy in the café. Rachel fumes but will Jai’s tactic work? Later, Jai thanks Megan for supporting him at court and they kiss. A jealous Leyla watches. But when Megan goes, Jai forms a plan, asking Leyla to befriend Rachel. It’s not long before Leyla is outside their house when she overhears a fracas inside, and swiftly reports back to Jai who assumes, Rachel has hit Archie. He’s about to storm over when Leyla stops him,they need proof. Before long, Leyla returns to Tennants, telling Rachel she’s there to return Archie’s teddy – but unbeknownst to Rachel, the teddy now houses a secret filming device…

Debbie tells Cain that Charity informed the father and he wasn’t interested, she questions what kind of man could do that. Later, at the hospital, Debbie’s stunned when the doctor explains Charity hasn’t visited Moses today. The doctor has news about Moses and Debbie battles with her confusion and guilt.

Kerry arrives to see Kyle but Joanie worries over what she has agreed to. Lisa tells Joanie that kids are hard work and she should accept all the help she can get. Joanie doesn’t seem convinced but when Kerry offers her help when she spills the tea, Joanie is grateful. Cain enjoys toying with Robert. Later, Robert asks to see the scrapyard books, threatening to pull out his investment. He and Aaron glare at each other, battle lines drawn. 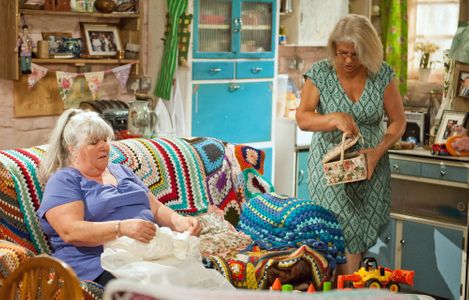