Sandy’s hurt to learn Gabby stole his pension and Ashley hopes he’s doing the right thing by involving the police. Gabby tells Liv her Dad has turned her in but as she looks at her bruised face in the mirror she gets an idea. Ashley struggles to keep up with the police officer’s questions and admits he has dementia. Gabby finds the police officers and, tearing up, says she needs to tell them something. The police return to Mulberry Cottage and ask Ashley to come to the station...

Holly goes to talk to Victoria but is stopped by Simon. He warns her to call Moira off or else the people he works for will get involved. Holly’s horrified to see Victoria’s witnessed everything and Victoria puts the pieces together. Victoria’s outraged but Moira begs her to understand that Holly would die in prison and pleads with her to keep quiet. Will Victoria go along with Moira’s plan?

Charity guesses one of the customers in the Woolpack is a judge for the competition and offers Rodney money to help her. Charity shows her ‘caring’ side and Steve the competition judge is impressed.​​ 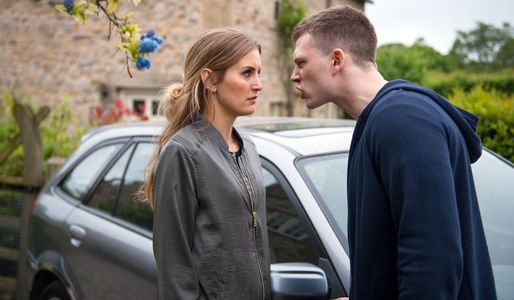