Lachlan struggles to hide his panic when the police arrive to question him. Seeing the messages from “Donny” on his laptop, Lachlan hurls it across the room in a rage. Later that day, an angry Lachlan attacks Robert for impersonating his dad and Robert riles him further…

Laurel’s overwhelmed to find Ashley’s organised a picnic for her with musical entertainment. They are having a lovely day, however; soon fall into contemplating their uncertain future.

Charity’s excited to have got her and Cain tickets for a brewery convention but he’s gloomy his divorce papers have come through. Later, Cain’s even more wound up when Moira urges him to sign the papers. Charity’s, however, determined to see them split for good.

Kerry asks Rishi to consider her as temporary cover for Laurel and is chuffed when he offers her a trial as supervisor. Paddy badgers Marlon about his friendship with Pierce but is hurt when Marlon bluntly points out it’s for Leo’s sake.

Laurel starts having twinges and she tells Rishi the baby’s coming.At the hospital, Laurel’s fed up a panicked Rishi is proving to be little help. The midwife tells Laurel it was a false alarm and she’s sent home. However, later Ashley goes upstairs to run Laurel a bath, her waters break and he’s shocked to return downstairs to find her in labour…

Charity urges Cain to stop denying he wants her. She covertly sends a text from his phone then begins seducing him. Moira shows up just as Charity is kissing Cain, and he’s furious to realise Charity set this up. Will her plan backfire?

When Kerry panics about not being able to do the rota, Dan urges her to ask for help, but she’s miserable to think she’s not managerial material. She tries to ask for Laurel’s help but is thwarted as Laurel starts having labour pains. Later, she’s delighted when Rishi thanks her for looking after the factory while he was with Laurel. Will she bury her doubts about doing the job?

Chrissie warns Robert to stay away from Lachlan and he’s outraged at the threat. Lachlan lashes out at Liv, calling her a charity case. Robert convinces Aaron they need to fight the Whites.Chas is concerned at Paddy’s delusions of winning Rhona back and Marlon tries to make Paddy see sense.​​​​​ 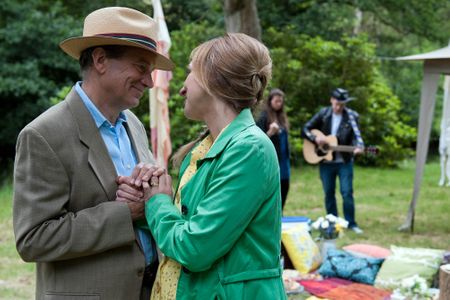