It’s the morning after the night before and a defensive Laurel insists to Doug her drink must have been spiked. But Laurel’s alarmed when he suggests they go and get explanations from those responsible and it’s not long before her lies are exposed. Laurel continues to be defensive, insisting Doug is over-reacting but is mortified when Doug explains she wasn't just sick, it was worse than that. Marlon arrives and the atmosphere is tense, will Doug reveal all to his son-in-law? Laurel’s defensive and relieved when April distracts Marlon. She desperately pleads with Doug not to tell him about April drinking her vodka. Marlon returns and asks Doug to leave so he and Laurel can discuss things. Will Laurel be able to talk her way out of this? Or is the wake up call she needed?

Vanessa is determined to be honest with Kirin about Adam before he finds out from someone else. Meanwhile Adam leaves a voicemail confessing all to Victoria but will he regret his actions? Later, Adam concocts a plan to get himself out of the mess. Later in the Woolpack Victoria becomes suspicious of Aaron; will they be able to keep hold of the secret?

Despite Finn’s attitude over things Val still feels guilty and is determined to get the pair back together.

Rachel is thoughtful when Ruby suggests she get a job at the factory, but will Jai be as keen on the idea? Later Ali is shocked to learn from Dan that Sean is in intensive care after an accident.

Rishi is concerned about the new house Georgia has found. Will Priya manage to get Rishi to admit he still has feelings for Georgia? 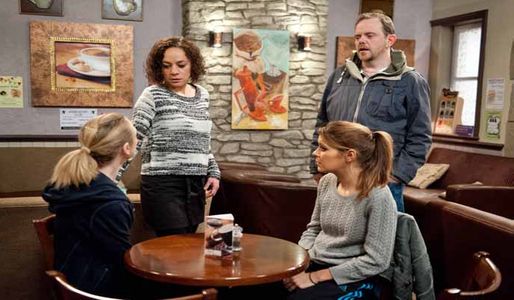