At the pub, Adam’s bitter as Ross comments they both have parents they hate. Katie and Donna are awkward, as Adam’s determined to drink away his problems whilst Ross directs snide comments at Donna. Adam shows interest when Ross suggests they steal vodka from the cellar, seemingly up for a bit of devilment. But will they get caught red handed?

With Sam acting oddly and money missing from the Dingle pot, Lisa confronts Sam who is immediately defensive. Sam’s cagey as he covers why he was late home the previous night and appears equally shifty when he tells Zak and Lisa he won’t be back for tea either. The pair worry Sam’s up to something dodgy, but what?

Alicia tells Leyla about Megan’s offer to re-start the wedding business giving Leyla a new idea for a business investment. At a family lunch, Priya announces her plans for an arranged marriage but Georgia thinks she is making a huge mistake. And Jai is relieved when Rishi offers him the cash for the business.

Diane tries to get used to the idea of Bernice and Andy, though it seems it will take a while for Gabby to accept it. Finn remains troubled as he considers his childhood and the recent revelations. 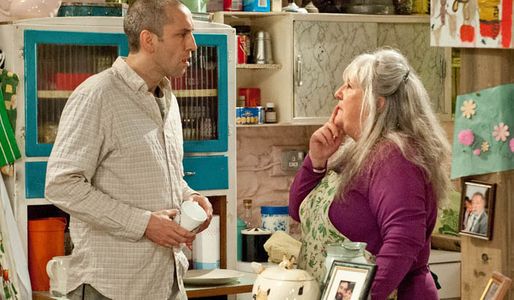 Emmerdale 30/07 – Gary orders Ross to break into a safe