Jai continues to watch Rachel’s actions from afar, but when ‘teddycam’ only shows a skewed image, his anxiety grows and he heads to find Rachel, determined to see Archie and make sure he is okay. Arriving at the playground, Jai demands to have his son for a few hours, Rachel agrees, preoccupied as she attempts to make up with Sam. Meanwhile, Jai has arrived back with Archie and checks him over for bruises, fighting back tears at the unhappy situation. Confessing his love to Leyla, he tells her they’ll be together in a few more weeks, before passionately kissing, unaware the hidden teddy cam continues to record. Will Jai fall victim to his own trap?

When James says the grain auger is broken with a new one costing thousands, Cain quickly decides who should foot the bill. He approaches Robert and coldly threatens to speak to Lawrence if he does not cough up. Later, Aaron’s left reassured Cain has finished toying with Robert, but how would Aaron react to hear of Cain’s on-going demands? And what if Robert were to put Aaron fully in the picture, exposing Cain’s secrets too?

Finn’s horrified when an infuriated Ross tells him he’s slept with Debbie behind Pete’s back.

Zak knows there’s something seriously wrong with Hamish and worries how Belle might take the news. Carly comments to Vanessa about Kirin flashing the cash causing her to wonder if Kirin is the mystery benefactor.

Rachel watches ‘teddycam’ as Jai tells Leyla how he’s hidden money and plans to leave Megan. Rachel is pleased to have such incriminating evidence on Jai though Sam suggests they bide their time and think things through before acting on it. But later at the pub, when Megan makes comments to Rachel insisting she and Jai could give Archie the life Rachel could only dream of, will the now empowered Rachel bite back and shatter Megan’s illusion?

Finn can’t get his head around his brother’s betrayal and Ross worries things are going to unravel. Finn arrives at Mulberry Cottage and Pete clocks he’s agitated state. As Pete asks what has happened, they are interrupted by Debbie. Will Finn reveal all?

Chas demands answers from her brother and son. Aaron admits Cain is blackmailing Robert, threatening to tell Chrissie about their affair. Cain shoots him a look of warning not to reveal any more. Annoyed, Chas explains to Cain that blackmailing Robert will only serve to bring him and Aaron back together. Will Cain take heed of Chas’ request, or will he push Robert for one final settlement?

Joanie suggests Belle needs to know the truth about Hamish, insisting she’s stronger than he thinks. Vanessa confronts Kirin about the money but he denies giving her it, confused she can only think of one other person it could be, but who? 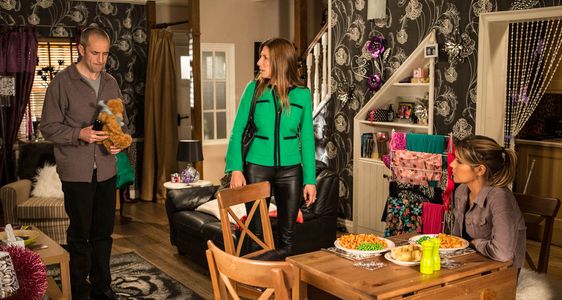