Lisa nearly confesses to Joanie about her and Zak’s kiss but when Joanie fears she’s got bad news about Belle, Lisa can’t bring herself to break the news. Lisa tells Zak to stay away from her, refusing to be hurt by him further.

Leyla and Pete are all over one another and Priya’s glum about Rakesh’s lack of sex drive. She’s stunned to find Rakesh’s suicide note to her in his jacket. Priya thinks the note is from today but Rakesh comes clean about his plan to get the life insurance for her. Priya tells Rakesh they put too much expectation on each other and drops another bombshell, leaving Rakesh broken.

Doug refrains from rocking the boat. Dan is starting to thaw when Megan shows up and tells him about Kerry and Sam. He storms out, furious.​​ 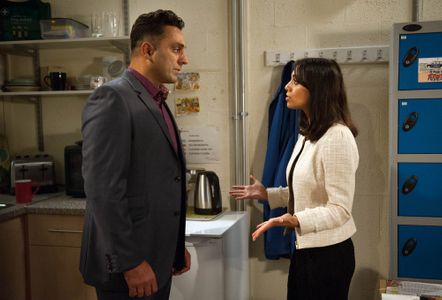