As Nicola gears up to do a haulage run in an attempt to save the business, Rodney agrees to let Jimmy stay with him until he sorts things out with Nicola. Despite all she's doing to try and help, Jimmy tells Nicola he's not her man any more and that she was the worst thing to ever happen to him. Can she win him back?

Elsewhere, Laurel's hungover and aware she's messed things up, but she can't resist trying on the engagement ring she's found hidden in Marlon's jacket pocket. But when the ring gets stuck, she has to avoid seeing Marlon. He wants to propose again but thinks the missing ring is fate's way of telling him to give up.

Also, Amy's organised a dinner for her, Andy, Joanie and Kyle - but soon their intimate evening is ruined when Val and Eric arrive, before Diane, Kerry and Dan are invited to join.

Amy's worried about how her gatecrashed dinner will turn out and things quickly go downhill when Kerry calls Kyle her grandson before Joanie finds out she used to date Andy. Arguments erupt and it looks like Amy risks losing Kyle all over again.

Elsewhere, Laurel comes clean to Marlon about the engagement ring and he proposes. Bernice can't resists spreading the news before Laurel and Marlon have even told anyone themselves.

Also, Ashley shaves his beard off and gets spruced up in preparation of going to see Laurel. Sandy thinks he's setting himself up for a fall and as Ashley leaves the house, he's unaware of the news that's just been announced in the Woolpack... 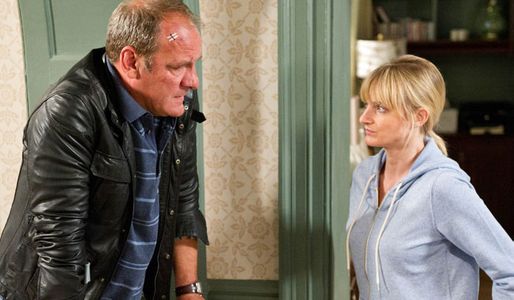