It’s the aftermath of the party and Vanessa is pleased when Kirin tells her his friends all approve of her. But do Vanessa’s friends approve of him?

At the garage, Ross offers to work but Debbie refuses, not prepared to trust him again. In the pub, Charity tries to reach out to Debbie, who reveals she has paid for Noah's ski trip herself. Charity's client, Shirley, arrives but Charity is wary when she spots Ross glancing at Shirley's expensive car. Charity's on the verge of securing a deal but soon Shirley discovers her car has been stolen. Charity is furious and confronts Ross who denies everything, remaining unreadable. Is Charity impressed with Ross’s gall?

Nicola and Jimmy go and see Rakesh to ask for legal advice over baby Carl but he informs them they probably have no rights over him. However, Nicola remains determined there must be a way. Later, Juliette arrives at Mill to give Jimmy the chance to say goodbye to Carl and Nicola is saddened to see Jimmy so besotted and annoyed she has only given them half an hour. Will Nicola do something drastic to try and keep Carl in their lives and at what cost? 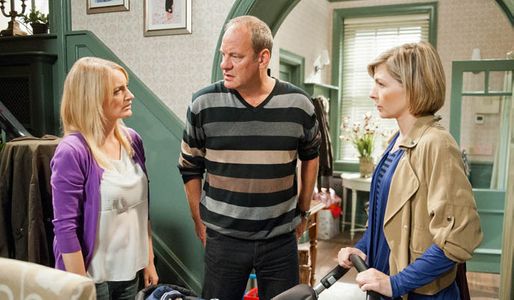