Emmerdale 04/02 - Will Katie keep quiet to protect her relationship?

Katie is hurt when she tries to talk to Andy but he still wants space from her. Meanwhile, Robert manipulates Chrissie into suggesting they pull out of the farm deal to punish Katie for saying he started the fire. Robert enjoys telling Katie the news and says he’ll leave her to inform Andy. Desperate to confide in someone, Katie talks to Chas, but is left feeling utterly alone when she doesn’t believe her, warning Katie to get a grip before she loses her husband. Will Katie be able to contain her fear and frustrations for the sake of her marriage?

Robert asks Aaron to meet him at the barn but is disappointed when he waits for Aaron and realises he isn’t going to turn up. Later, Robert joins Lawrence and Chrissie in the pub where they are having pre-wedding celebration drinks. Robert spots Aaron and follows him into the toilet, his words leaving Aaron gutted his plan backfired. Soon after, Aaron spots Katie outside the pub, and without warning blurts that she is right about Robert; he has been having an affair and he can prove it to her tomorrow...

Leyla’s shocked to discover Katie’s selling the house to Rodney and Georgia, but Rodney’s not sure about the move and does a sly deal. 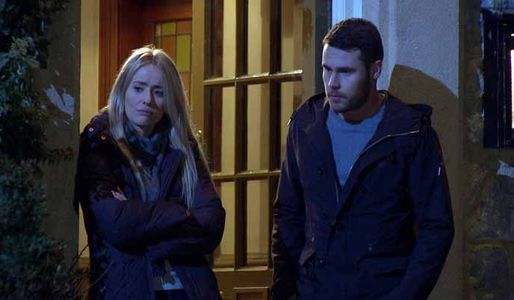