Liv listens to the recording she has made of Aaron and Robert but later feels guilty when she overhears Aaron tell Chas they can trust Liv. She tells Gordon she believes Aaron and doesn’t want to help him anymore. But Gordon becomes dark and snaps at Liv, when she returns home, a tear-stained Liv drops herself in it when she mentions Ryan. Realising Liv has been spying on them for Gordon, Aaron fumes but is soon worried when Liv runs away. Putting his own fears behind him, a brave Aaron goes to confront Gordon but who will have the upper hand? And what will Liv do with her recording?

​Chrissie thinks Bernice is jealous of her fling withAndy but Bernice agrees to stay quiet about the affair. Bernice finds Andy’s watch and tells Lawrence it's Robert's but will her secrecy backfire?

Holly nags Cain to teach her how to throw a punch and accidentally punches him in the face. She enjoys having banter with Cain and Moira’s delighted Holly has decided to stay. But why is she staying?

Gabby is impressed when Lachlan gets tickets for a gig. Gabby tries to go too but is refused byLaurel and Ashley. Lisa thinks Joanie’s getting preferential treatment at work. 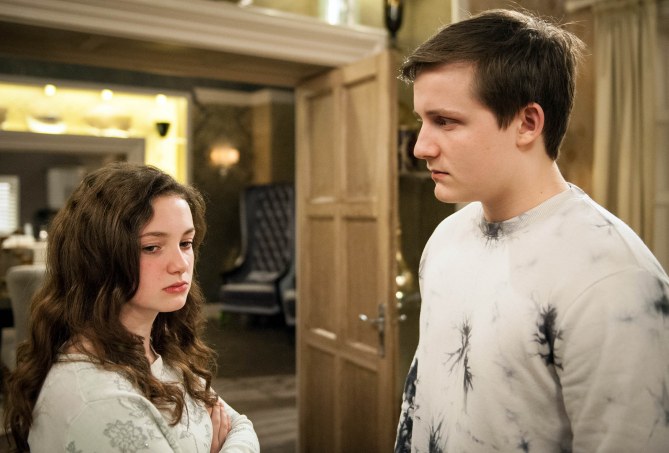