Andy wakes up in hospital after an operation and shocked to hear how long he will have to stay in due to the severity of his hand injury. Chas assures Moira that Cain is back because he loves her but Moira’s unsure. Meanwhile, a guilty Adam apologises to Andy, telling him he’ll help with anything he needs. Andy tells him he’s fine and to sort things with Moira and James instead.

Home Farm is decked out with stalls and stands. Megan and Leyla arrive at the Home Farm launch with their display but Megan is left hurt with Declan’s harsh attitude towards her. Megan berates Charity, congratulating her on using her miscarriage to get her way and as Charity takes to the stage to give a speech Megan interrupts, warning her to watch her back. Later, Declan urges Charity to try for another baby and wanting to keep him on side, she throws out her pills but is this just another lie in Charity’s cold-hearted scheme?

Donna is alarmed when PC Stone tells her they’re going to the garage as they have a lead on the jewellery robbery. Donna takes Ross to one side and tries to explain a cover story and he’s impressed when Donna makes fake phone calls telling her colleague Ross’ story adds up. Later, Donna’s unsettled as Ross teases her about having feelings for him, is he right?

Priya is upset when Jai takes a call about Dhillon turning her down but is determined to stay positive about finding a husband. 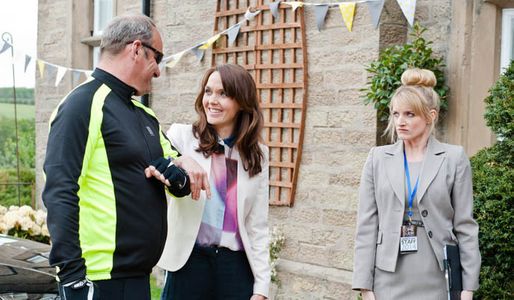