Jai's guilty but relieved when Ali tells him there's no news on Rachel from Harriet. Harriet wonders what she’s let herself in for when Kerry asks her to help organise Ruby and Ali’s hen do. Ali decides she wants to invite Jai and Megan to the blessing but how will a guilty Jai feel? Meanwhile, Kerry learns Carole is back on the scene but is Kerry about to play cupid?

Kirin's guilty when he learns his dad is helping Charity because Cain told him to. Charity’s shocked when Rakesh offers her legal support and realises Cain was the one who came to her rescue. Meanwhile, Kirin offers Cain money to pay for the right kind of lawyer (Rakesh is a corporate lawyer) for Charity but is Kirin playing with fire?

Robert’s stressed by Chrissie’s accusations Leyla is flirting with him. Feeling frustrated with how things are at home, Robert pulls over at the side of a road in a layby and texts Aaron telling him he’s broken down. Aaron smiles but on arriving at the scene is sceptical there is anything wrong with Robert’s car. Just what is Robert’s game? 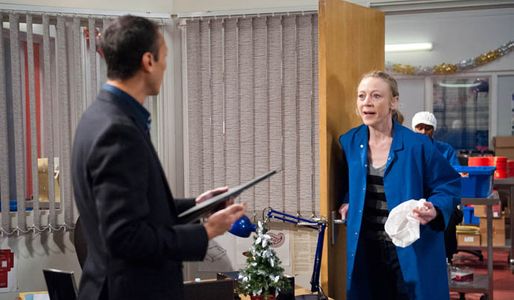