Emmerdale 04/7 - Laurel wakes up with a hangover

Laurel wakes up with a hangover. As Ashley still doesn’t remember she’s an alcoholic, she pretends he drank all the wine and escapes. When Laurel sees Marlon she snaps and he realises she’s had a drink. She shouts at him before confiding what happened, upset she still wants to drink. Soon things take a turn for the worse when drunk Laurel tries to seduce Marlon, urging him to drink with her, but he refuses, making her a cooked breakfast instead. She feels better after but Marlon warns her to face up to the problem. He leaves and she pours herself a glass of wine. Laurel knows she has a major decision to make regarding her future.

Vanessa and Pierce laugh at Pearl playing detective. Rhona and Vanessa giggle together and Pierce urges her to “come out”. Pearl overhears and misconstrues the comment thinking Rhona’s having a fling with Vanessa. Later Rhona tells Pierce what happened with Vanessa when she was addicted to the painkillers but how will he take the news as later he tells her they should split up before someone gets hurt.

Lisa asks Charity to hide the news from Belle that Bailey’s been suspended. But how will Belle take the news when she finds out? Ashley, Dan and Harriet come to cheerJimmy and he’s glad for their support. Harriet watches Ashley sadly, knowing how hard his condition must be for Laurel.​​ 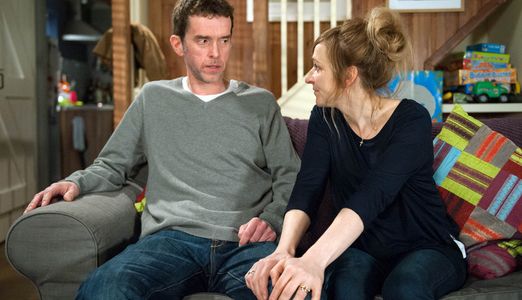