Marlon is still furious with Laurel, who insists she didn’t know she was over the limit. She tries to cover her distress as Doug returns. Doug is later concerned Marlon is neglecting Arthur as he and April prepare for the bonfire party. They clash as Doug tries to discipline April. As the adults squabble, Arthur finds the box of fireworks and takes them outside on his own.

Charity gives Ross his share of the money as he shows off another car he has stolen. When Aaron arrives, he and Ross realise Charity has tricked them into working together. When they refuse, Charity locks them both in the barn knowing the confined space and level of aggression between them, will soon force them into sorting out their differences.

At Home Farm, Andy refuses to help with some removal work and Robert suggests he quit. Andy begrudgingly follows Robert's orders. Soon Robert's humiliated by Lawrence who insists Home Farm stays as it is, undoing all of Robert's work. Later, Andy is surprised at the genuine warmth between Chrissie and Robert as they embrace. Lawrence offers to pay for Andy and Katie’s engagement party he’s seemingly keen to form a bond with Andy, but why?

Diane and Doug are loved up following last night. Diane is keen to keep things quiet but Victoria soon catches Doug sneaking out. Debbie is wary when Charity pays her back for Noah's ski trip. Harriet agrees to help Amelia with her plan to get Ruby home and Kerry's pleased to hear about it, keeping the plan a secret from Dan. 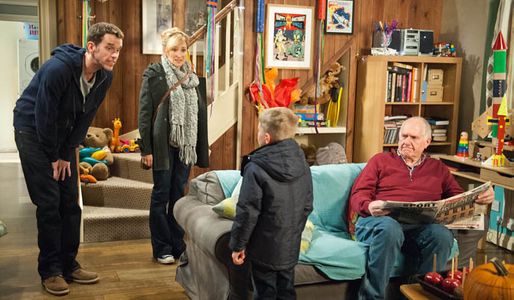 Emmerdale 05/11 – The truth about Archie’s father is revealed