The Dingles are appalled Belle is set to leave for Boston with Jermaine Bailey. Zak implores her not to go but she insists it’s the right decision. The Dingles start to plot how to stop her leaving. Soon Cain takes matters into his own hands when on a country lane he stops the car and orders Belle to get in. But will Cain’s methods work to get Belle to remain? Soon Lisa returns and is shocked to hear for the first time Belle is going to America.

Jimmy and Nicola’s relationship woes worsen when she says she’s called a solicitor. Later, Rodney and Laurel reassure Jimmy that Nicola won’t really want a divorce. Nicola overhears Kerry and Brenda gossiping and Kerry tells her she started all the problems by kissing Dan. Later, Jimmy tells Nicola he’s going away for a month to give them space Nicola is utterly heartbroken to realise their marriage might be over for good.

Finn prepares to seek out Kasim. Pete worries he’ll get hurt but Emma insists he needs to distract himself from grief. Later, Finn returns distraught Kasim’s been discharged and he’s lost him.But has he? Rhona is proud of Pierce when he doesn’t rise to Liv’s taunting.​​ 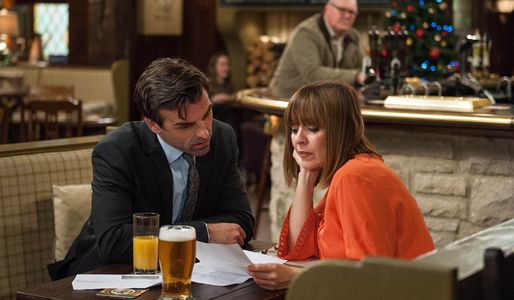