Emmerdale 05/5 - Andy warns Chrissie to sort her head out

Andy warns Chrissie to sort her own head before saying anything to Lachlan aboutLawrence’s confession. Chrissie tells Andy they're getting away as soon as she's told Lachlan the truth but she's taken aback when he tells her to stop punishing Lawrence. Bernice keeps getting anonymous phone calls and is hurt by Lawrence's attitude as he snaps at her. She’s shocked when she answers the door to Ronnie Hale but what does he want?

Pete arrives back in the village from prison and gives Robert a letter for Aaron from Gordon. Robert tells him to keep it to himself and wonders how he's going to handle it. Emma’s devastated when Pete says he has been given a job in Aberdeen. Finn later tells Pete about the taxi business but Ross says Pete will never go for it with him involved.

Pearl reads from Edna's diary and Laurel's moved to hear what she thought of Ashley but Ashley says the person they’re reading about doesn’t feel like him. Ashley finds Sandy alone in the church and Sandy tells him he feels close to Edna, leaving Ashley to contemplate his own restoration of faith.

Chas realises why Liv was stealing and Aaron realises life with a teenage girl isn’t straightforward. Robert tells Adam about the letter from Gordon but he’s still keeping it from Aaron. Adam insists he give Aaron the letter and let him decide for himself if he reads it but will he? Bailey waits for Belle with a picnic and she's happy as they fool around. 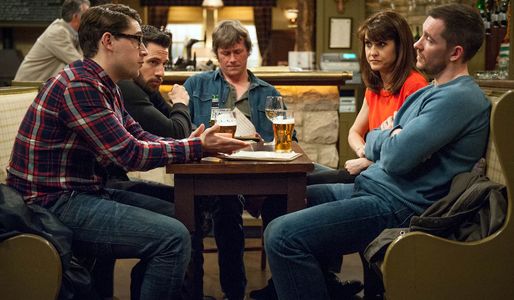