Charity is determined to keep Belle away from Doctor Bailey and later lies in wait to intercept him. Charity threatens Bailey but he assures her he is leaving for good. Belle’s crushed when she learns he is going and hurries to find him. Bailey is shocked when she announces she’s coming with him. To trap him, a desperate Belle lies she is pregnant. Will Belle’s lie force Bailey’s hand over staying?

Laurel is weighed down by the thought of telling Ashley she has decided she’s leaving him. Marlon bumps into Ashley but falters when it becomes clear Laurel hasn’t yet mentioned her plans. But when Ashley returns home the news is delivered and hits him hard. Ashley begs Laurel to stay, but she sticks to her plan. Later, Sandy finds Ashley distraught and encourages him to find Laurel a way to cope rather than just giving up. Meanwhile, Laurel and Doug take a walk and she confides how Doug was right to say their relationship was doomed. Doug denies this and taking Laurel’s hand, tells her she needs to remember something. They go to the church and Doug tells Laurel she can’t give up on her vows. Will Doug get through to his daughter?

Rhona tries to convince Pierce not to give up on them but he insists they’re both in different places. Later, after Rhona gets upset to overhear Pearl and Brenda gossiping about her she decides to take matters into her own hands. Later, in the Woolpack, Rhona kisses Pierce in front of everyone asking him to give her another chance. He responds with a passionate kiss. Rhona is happy to be with her new man and not care what anyone thinks.

Rakesh argues with the insurance company but hides his stress from Priya. Outside, Rishi approaches Rakesh about throwing Priya a surprise 30th Birthday.Later, Rakesh and Priya are surprised to find an insurance man on the property and Rakesh lies to Priya hoping she will buy it. Doug corners Ronnie outside the B&B and ropes him into appearing in his DiY vlog. Will Ronnie manage to escape?​​​ 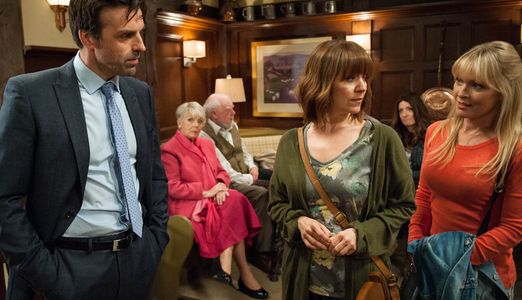