Joanie’s overjoyed Belle has come to her hen do and gives her a dress for the wedding. Ellie has a go at Belle for enjoying herself and Belle’s horrified when Joanie catches her talking to her alter-ego. She covers she’s talking to her baby. Belle picks up Joanie’s dress by mistake and Lisa’s stricken to see it, making Belle feel awful. Ellie calls Belle a traitor and she swears she’ll prove she isn’t.

Cain’s wounded when Moira calls their marriage a mistake.Charity’s gleeful Cain’s moved out and wants him to stay at the pub. Alone with Holly, Moira breaks down and Charity’s disappointed to learn Cain’s staying with Lisa.

Nicola threatens to sue Jimmy for bad physio and Dan’s disturbed to see her limping. Nicola promises Dan the kiss was a one-off and Dan agrees to do physio with her again. But are they just burying their mutual attraction? Emma’s hurt James thought she would gossip about Moira and Holly but she’s pleased when he suggests looking at buying Wylie’s Farm. 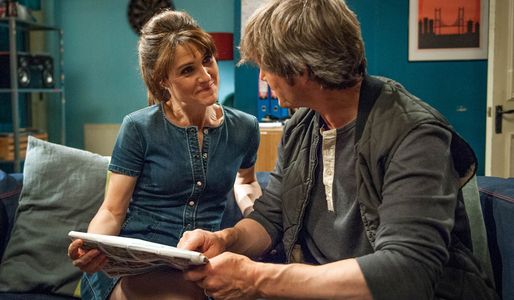