Ashley is worried about Laurel. Meanwhile, Rhona is determined to get answers asking Marlon if there is something going on, soon their conversation is curtailed when Laurel walks in and lashes out at Rhona for gossiping about her. In desperate need for a drink Laurel is soon taking drastic action when she breaks into the village hall to steal alcohol from the village tombola. On discovering the break in and seeing the sorry drunken state Laurel is in, both Marlon and Ashley are at a loss what to do. Marlon truly considers the reality of Laurel being a full blown alcoholic.

With Chrissie still away Aaron is enjoying spending quality time up at Home Farm with Robert. But Robert is concerned about Aaron’s need to exercise. Aaron lies to Chas where he has been as they go on a run together. Later, Aaron heads back to Home Farm but is annoyed when Robert tells him Chrissie is back tomorrow. He’s upset Robert can switch his affections so fast. The Chrissie news sends Aaron back out running this time loaded with extra weight and soon he’s struggling and stumbling as he pushes himself into punishment.

Brenda remains unimpressed by Bob’s attitude towards Carly. And is Carly up to something?

James’ is disappointed with Chas when she confides in Paddy whilst Emma asks Ross what James sees in Chas. Pollard tells Pearl he wants her out of her house by the end of the day but will Pearl get the last laugh? 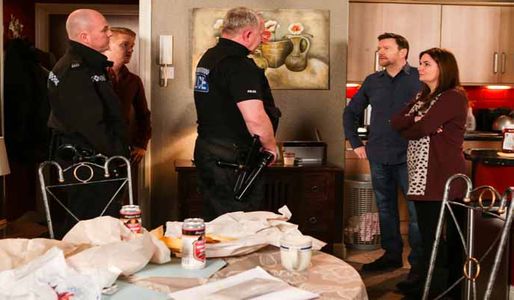 Emmerdale 04/7 - Laurel wakes up with a hangover

Emmerdale 18/04 – Who is the Village Samaritan?