Carly’s dismayed to find the shop flooded, her panic rising even more when she tells Bob she forgot to insure the shop. When Brenda complains the builder hasn’t turned up to start work on Gennie’s memorial playground, despite the fact she’s already taken the money out of the bank, Bob listens and starts to eye up the cash. Elsewhere, desperate for money Carly blackmails Val, demanding money or she will tell Eric about the fraudulent loan, but Val refuses. Will desperate times call for desperate measures?

At the factory Megan tries to get involved with work, Jai snaps at her but Rishi has her back. She arranges to meet with Leyla, knowing Jai was on his way to see her, enjoying ruining their plans. Later, Jai confides in Megan it’d be better for them if Rachel was out of a job, and whilst she feigns agreement she is seriously concerned. Can the two women out smart Jai?

Ross offers to help a stressed Debbie forget about her worries, but fighting her conscience she walks away. Meanwhile, Pete worries about her lack of interest in the wedding. Later on, Ross and Debbie kiss, arranging to meet up at Dale View, but their plans are ruined when Pete tells guilty Debbie he’s taking her away for the night. Can Ross contain his jealousy?

Paddy prepares to euthanize Hamish but Zak worries when Belle insists on being there for his last moments. Afterwards, Belle reassures them she is okay. Lawrence fumes at Robert for gifting Moira with a grain auger, but will Robert win him round when he explains it’s a good PR stunt? 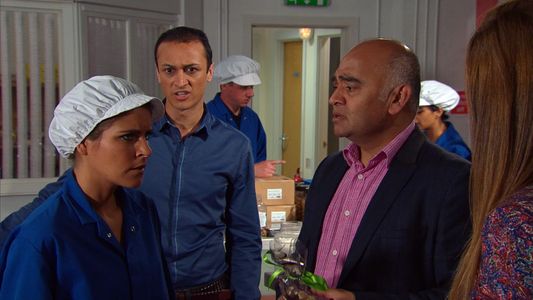