Donna thanks Marlon for not telling Laurel about her having refused chemo. A guilty Marlon confesses to Paddy he kissed Donna and Paddy thinks he is in too deep especially when he tells him he’s going to help Donna make a video for April. After a heart-breaking attempt to make a video for April to watch in the future, Donna and Marlon cling to each other in grief over what is to come. Later Donna fears she has put Marlon and Laurel’s relationship in jeopardy when Paddy tells her he knows about the kiss...

Leyla comes to the factory to get Laurel to book her wedding package with them but Jai thinks it is to see him. Megan steps in to seal the deal much to Leyla’s annoyance but she enjoys flirting with Jai. However, Jai’s left feeling guilty when he later calls at Tug Ghyll to give Leyla her phone and they get a call from Megan. Are these two playing with fire?

Moira is more detached than ever from Cain when Vanessa confesses she saw him with Charity. Secretly checking the diary at the garage for Charity’s car booking, she’s even more worried when Debbie doesn’t know where Cain is. Does Moira have anything left in her to fight for her man?

Cain hands Andy his compensation cash. Sam introduces Tracy as his girlfriend but Robbie’s suspicious she’s up to no good when a tenner goes missing. He wants to warn Sam but realises Sam is already smitten. 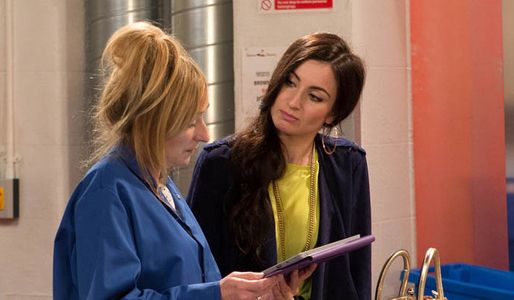