Kerry’s wracked with guilt pretending to Dan she is going for a wedding dress fitting. Frustrated when the camper van Hetty won’t start, she callsDan but he’s with an irate customer and cancels her call. Frustrated, Kerry goes into the garage and borrows a car. Outside the clinic, Kerry parks on double yellow lines outside the clinic and dashes in just as a parking attendant appears on the scene. Meanwhile, Ross has discovered the missing car is outside the clinic. He and Dan soon arrive outside the clinic just as it’s about to be towed. Kerry is inside taking the pill. Dan sees Kerry coming out and heads off to speak to her..

Cain reassures Charity he can’t wait to leave the village but she worries when he says he’s going to tell Moira, insisting she’ll be glad to see the back of them. Later in the Woolpack, Charity announces she and Cain are leaving and Pete warns her she’s messing her kids around. But how will Moira’s react when Cain arrives to tell her he’s moving to start a new life with Charity abroad?

Marlon confides to Rhona he feels intimidated by Carly’s competitiveness and Rhona takes it upon herself to tell Carly. How will Carly react to Marlon’s worries? Elsewhere, Laurel’s anxious about leaving baby Dotty when she returns to work.

​​​Outside the clinic, Dan demands to know what Kerry’s doing there, fearing she’s ill. Will Kerry come clean? Whilst watching the triathlon which Carly andPierce are taking part in, Rhona tells Marlon to stop worrying about what other’s think and accept Carly has chosen him. Later, Carly runs by and pretends to stumble and twist her ankle just for Marlon’s sake so she looks weak and thus not dent his male pride. But will Marlon suss her ruse and can he find a way to deal with having such a physical girlfriend? Ross is thrown when Charity tells him she wants Moses to stay on with him when she leaves.. 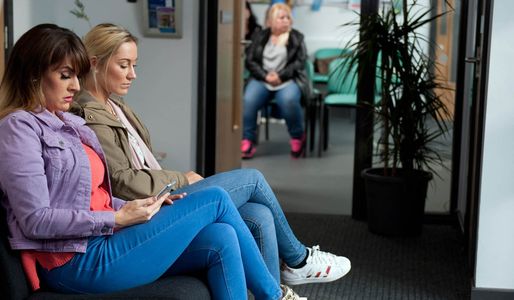