Jacob worries David is not looking after himself and to prove a point deliberately lights a cigarette in front of Tracy. Later telling David and Leyla he was only risking his life in the same way David is.Tracy consoles David over Jacob and they kiss, but Tracy is alarmed when a tuft of David’s hair comes away in her hand. David is distraught and wants to be alone. Meanwhile, Leyla has a chat with Jacob, but will it help?

DS Wise apologises for upsetting Chas who explains she isn’t ready for a relationship after Gordon. He accepts but later Charity encourages her to give him a chance. Aaron tries his best to comfort his mum but she insists he should go on his holiday to Wales/ Later, after knocking back the booze, Chas is drunk and morose. Charity takes herinto the back room to let her sleep off her drunken stupor. But is singledom the only thing worrying Chas?

Lachlan’s frustrated Belle hasn’t dumped Bailey. Later, Zak and Lisa insist they need to speak to Angie to stop her calling the police and Belle reluctantly agrees dreading the visit. When they all arrive at the Bailey’sBelle apologises and assures Angie she’s getting help.

There’s a thawing between Rhona and Vanessa both glad to be friends again. Rhona returns home and admits to Pierce she’s been worrying too much they share a passionate kiss. Elsewhere, James tells the boys about his plan. 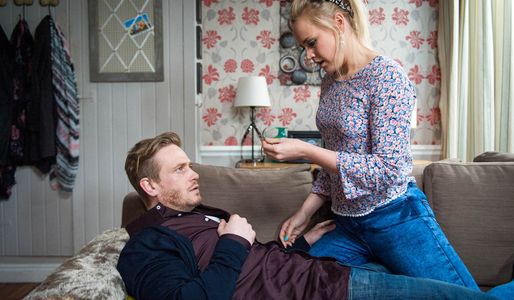