Laurel leaves another worried voicemail for Marlon, having not heard from him. Cain's adamant Marlon should kick her out. Marlon is unreadable as he heads to see Laurel. Marlon tells her she has to change and she proves she is by showing him her appointment letter for the clinic. Later, Laurel's alarmed and Marlon is terrified when he stumbles, unable to see out of his injured eye. Cain offers to take him to the hospital where he's told what he has and that he needs surgery as soon as possible. Embargoed: he has a detached retina, caused by the blow to his head. Marlon insists Laurel go to her appointment regardless. Later, Cain's suspicious of where Laurel is and soon makes a discovery giving her an ultimatum.

Finn's down Darren has already moved onto someone else so Val suggests he go to Portugal for the summer to run Paul's bar. Emma tells him she's taking him out to cheer him up and soon James has joined them in a plea to keep Finn in the village. Meanwhile, Chas and Aaron have also arranged a night out together to get away from it all. Soon the parties collide in a bar and Chas see’s Emma looking cosy with James. James pulls away when he sees Chas, but has the damage been done?

Bernice has lost her watch and thinks Tracy's to blame. Fed up with having her in the house Bernice puts a video call into Nicola who is furious to discover Tracy's moved in and fuming tells Jimmy to get rid of her, leaving him conflicted. Later, Bernice is smug as Tracy leaves but shocked to discover the truth about her missing watch.

Dan’s struggling and Kerry tries her best to cheer up Amelia but her hare-brained methods annoy Dan. David's intrigued when Pollard suggests he and Alicia go to Portugal.

Laurel sweeps out with the cash forgetting to close the door and Daisy the dog seizes her chance and bounds out. Meanwhile, in hospital, Marlon has an eye patch when Cain collects him. Cain fills him in on Laurel not making the meeting as she was drunk, explaining he’s given her money to go. Back in the village, Laurel heads to to buy wine and on getting home, necks another glass before picking up Marlon's key and stumbling out. Driving back through the village, Cain and Marlon are horrified by what they witness. It’s enough for Marlon to order Laurel out of his life once and for all.

In the bar, Chas makes an effort and joins Emma and James and James is amused when Chas takes to the dance floor. An irked Emma leaves, looking thunderous especially when Finn speculates on James and Chas getting back together. Once outside of the bar Emma gets accidentally shoved by a group of youths who are passing. They help her up, apologetic, but fuelled with bitterness and jealousy Emma has an idea and empties her purse before throwing it away and heading dishevelled back in. She lies to James she has been attacked and had purse stolen. But will her ploy work?

Tracy wants her old job and room back at the B&B but later Tracy does her best to make Bernice feel guilty. Dan's forced to admit the truth to Amelia about her goldfish and Kerry resolves to always do right by Amelia. David and Alicia’s hopes for Portugal are dashed. 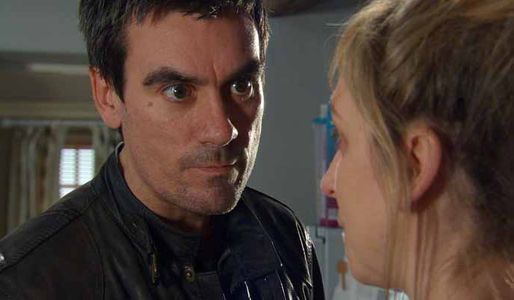