Brenda’s upset convinced someone has stolen the memorial money. Meanwhile, Bob asks Carly for the money back, but she insists it’s too late. Bob approaches Val for a loan, but on her refusal is left feeling even worse. Later, Bob discreetly plants money from a payday loan company in Brenda’s apron. But it doesn’t have the desired effect. As when Brenda finds it, knowing she’s already checked her apron, starts doubting her memory. Things are exacerbated when Carly suggests she has been absent minded lately and Val supports the idea. Later Brenda approaches Chas worried her brain tumour is back and wanting Chas to accompany her to the hospital. Confiding that if the tumour has returned, this time she’s going to let nature take its course.

Aaron is initially uneasy when Robert offers to help them on the farm and Andy’s surprised when Robert offers to help out more often. Later, Robert tells Aaron that Cain’s blackmailing has ended; Aaron insists they don’t owe each other anything anymore. After a day of hard graft, Andy suggests they all go for a drink but Aaron makes his excuses and is defensive when Chas later asks about his day. Paddy and Chas are concerned to learn Robert spent the day with Aaron. Paddy promises to speak to Aaron, determined to keep them apart.

Finn tries to find out what’s bothering Ross, convinced it’s something to do with Debbie and is left suspicious by Ross’ reaction. Kerry offers to look after Kyle but soon Kerry and Val argue with it escalating into a full-blown fight with paint. As they fight, toddler Kyle deletes Dan’s course assignment. Belle lays flowers at Hamish’s grave, Joanie comforts her. 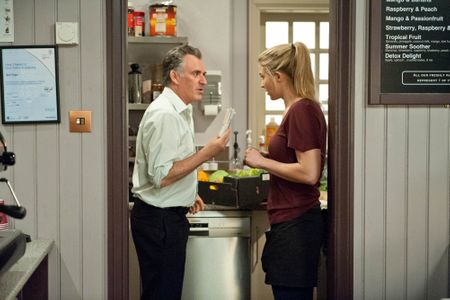