Joanie reads Amy a list of ground rules before she's allowed to see Kyle. Amy's gutted she doesn't trust her.

Meanwhile, Pollard stops Val going to Amy's. She refuses to go on holiday - she's needed in the village. As Pollard leaves, he tells Amy he loves her and asks Val to take care of her.

Elsewhere, Edna's becoming increasingly wary of Ashley and she feels uneasy when his divorce papers arrive in the post.

Laurel visits Ashley in the church and tells him she wants them to still be friends and he leaves upset. She soon notices there's more to the situation - especially after a chat to Edna.

Later, Edna offers to support Ashley but he's angry when he finds out she's been talking to Laurel about him. He's horrified when he realises Edna is scared of him.

Also, Marlon and Vanessa are relieved when Paddy reluctantly agrees to talk to Rhona. But he's furious when he realises they manipulated him. And when Chas arrives to try and persuade him to talk to her, he tells her to back off. 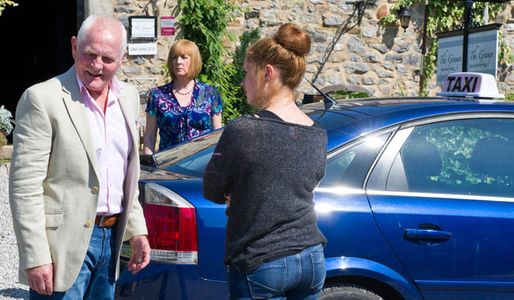