James and Emma return and Emma excitedly tells Finn she and James are moving into Wylie’s Farm the next day. Soon she’s bossing the boys around as she starts packing. Later Moira is drowning her sorrows in the Woolpack. She’s drunk and Ross ends up driving her back up to the farm. Could a drunken Moira let something slip?

Priya asks Rishi to give her a loan from the company to pay for the Mill. He agrees to look into it but later is concerned to find mysterious expenses on the company account. Jai’s affronted when Rishi suspects him. Soon Rishi is sad to realise it must have been Priya and Rakesh. They show the accounts to Priya, how will she react as secretly for Priya it’s confirmation Rakesh is having an affair.

Laurel fusses over Dotty, reluctant to leave her with Diane to go back to work.Lawrence is shell-shocked when Bernice shows up warning him off from mistreating Laurel and Ashley.​​ 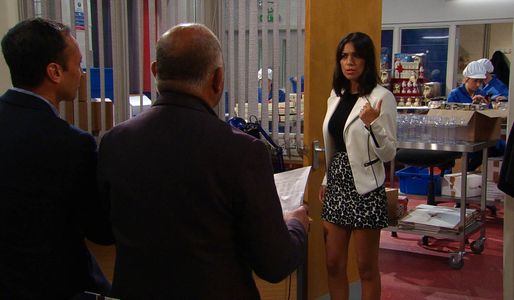