Alicia and David talk about how Alicia is unable to conceive. Later Priya overhears David telling Rachel about Alicia’s inability to have children, and realises she may be pregnant herself. Both Alicia and David feel guilty about how they’ve treated Priya after Gemma’s confession. Just as David apologises for not believing her, the pregnancy test falls out of her bag…

Gabby is loving stirring up trouble after planting Bernice’s bra is Jimmy’s bag. Jimmy finds the bra and shows it to Bernice, who is taken aback by the discovery. Will they work out what has happened?

​Jai attempts to bribe Sam with money to keep quiet, but fails as Sam tells Rachel he can handle himself against Jai.

Elsewhere Rodney comes face to face with Veronica in front of Georgia, and they seem to know each other. Amy wants to remain a part of Kyle’s life. The Woolpack reopens to lukewarm reviews about the new décor, but Chas is happy.

Jai talks Sam into keeping quiet about Archie, but will he be able to hide the deceit when he comes face to face with Charity?

Gabby admits hiding her bra in Jimmy’s pocket to an astonished Bernice, who worries about Gabby’s attitude. A concerned Jimmy doesn’t believe Bernice when she tells him it was Gabby and tells her she needs to move out.

​Elsewhere Diane is pleased that Chas is moving on with her life, Georgia finds out about Rodney’s job and Amy won’t leave Joanie alone, so Joanie calls the police. 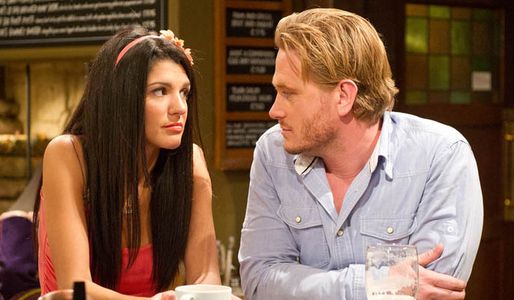