Kasim invites Finn for lunch. But when Pete spots him he warns Finn, secrets always come out in the end. Finn agrees he’ll tell Kasim how he was regularly visiting him in hospital. Later, as Finn prepares to tell Kasim the truth Kasim pulls him in for a spontaneous kiss. Finn is in raptures his dream is coming true and further delighted when Kasim announces he’s going to stick around for a bit. Later, Finn’s horror-struck when Emma meets Kasim and says she wants to hear everything, fearing she’ll reveal all. Will Finn manage to tell him himself before someone else lets it slip?

Lisa and Zak reassure her they’re on Belle’s side whatever she chooses todo…..

Laurel tells Gabby she shouldn’t have to take on the burden of her Dad’s illness alone and encourages her to let go and be happy. Gabby misinterprets Laurel’s advice with a boozy plan. Rhona tries to give Pierce an early Christmas present but is horrified to see it wasn’t what she bought. Meanwhile, Paddy gives Chas her present and she’s also shocked with the gift.​​ 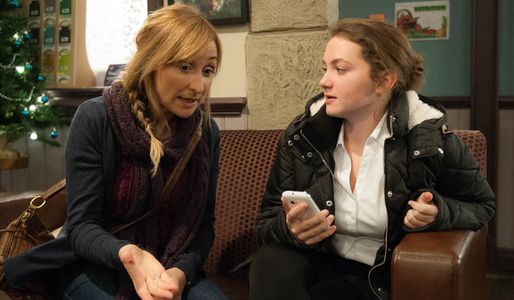