​Robert figures out Lawrence was behind the attack and threatens to use it against him. Chrissie's shocked to realise her dad was the one who hired the thugs and Lawrence is devastated when Chrissie compares him to Robert. Lawrence sinks to the floor, in the middle of a cardiac arrest, alone and panicking, Robert arrives but will he help Lawrence or leave him to die?

Gabby's shocked when Jacob makes a confession and she suggests they should stick together in sympathy. Gabby steals a bottle of vodka and the pair head to the pavilion, where they play a drinking game before they end up kissing.

Leyla's frustrated Megan has brought baby Eliza into the office but Megan’s determined to prove she can cope. Jai mentions to Harriet how Megan's refusing help and Harriet suggests an idea.

Belle has a rash and is worried about her date with Dr Bailey. Priya advises her to go to the doctors. At the Doctors, Belle shocked to learn Dr Bailey is married. Leyla surprises David by turning up to support him. Joanie's annoyed by Zak's jealousy over Rishi.

Bernice is rocked when Chrissie tells her Lawrence was behind Andy's attack. Chrissie comes across an old letter from Ronnie Hale. Keen to find out if he could be her real dad, Chrissie looks him up on a search engine and it's clear she's not letting this go.

Jacob stumbles which gives away he’s been drinking. Meanwhile, Ashley smells the alcohol on Gabby. David realises Jacob is suffering more than he thought.

​Harriet invites Megan to the mother and baby group but Megan's fed up people think she can't cope. Megan later apologises and enquires about getting Eliza Christened.

​Dr Bailey’s is perturbed to realise Belle knows he's married. Will he talk her round? Zak wonders if he can accept a relationship on Joanie's terms as she tells him she's a bit of a flirt sometimes. 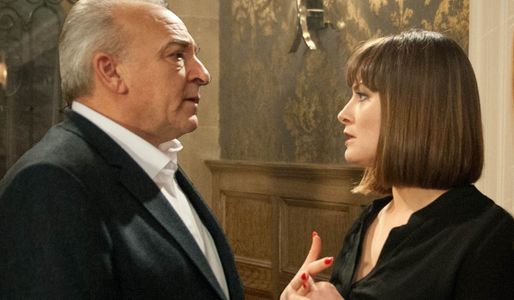