Charity is desperate for Cain to admit the truth now she suspects he is lying to her. Meanwhile, Moira confides in Chas how she thinks something is going on with Cain and Charity. Soon Charity is completely floored when Cain admits what is wrong and how he could die at any moment. As Cain bites back his emotions as he explains having the operation is a risk but threatens to kick her and Noah out if she tells anyone. Charity doesn’t agree and heads to Butlers Farm to tell Moira, but is interrupted. Cain arrives home and is uneasy when Moira reveals plans for them to take a holiday abroad. Scared of the dangers, Cain snaps at her, leaving her feeling hurt. Cain is soon spoiling for a fight in the Woolpack and Charity is forced to intervene, threatening to tell everyone the truth if Cain doesn’t calm down. Chas, who is watching, is alarmed wondering what Charity has over Cain - certain something is going on.

Katie notes Alicia has bought herself a new dress suspecting an affair with Robert. Whilst, Robert tells Katie and Andy he’s trying to make amends, but Katie still can’t trust him. Later, Aaron is frustrated when Robert insists they can’t risk being together now Katie has suspicions. Meanwhile, in the Woolpack, Katie’s fears grow as she watches Robert flirt with Alicia. Robert is interested to hear of her suspicions, determined to use them to his advantage.

Chrissie is pleased Lachlan has joined the football team and Lachlan tries to impress David with his football knowledge. Adam and Aaron get bad news about their forthcoming business venture. Pearl enjoys the glamour as she accompanies Paddy to a veterinary party.

Moira is apprehensive as Chas tries to broach her suspicions with her. Debbie unwittingly fuels Chas and Moira’s suspicions about Cain and Charity. Later, Chas warns Cain to stay clear of Charity, fearing they may have rekindled their relationship. She insists that Moira needs him, leaving him thoughtful. That afternoon, Cain surprises Moira but his actions freak Charity who is desperate for Moira to know the truth, but Cain threatens her with eviction if she says anything.

Chrissie’s grateful when Robert offers to take Lachlan to football training, blissfully unaware of his ulterior motive. At training Robert charms Alicia offering her money for the football team. David’s grateful he’s going to sponsor the football team and Robert arranges to discuss things further with Alicia, delighted events are playing into his hands. Alicia and Robert head to the Woolpack, where Chas is unsettled to see them together. Robert has set the scene and is thrilled to see Katie glowering from the bar. Katie is clearly wound up and soon venting to Andy.

Adam has a plan of action in place to get back with Victoria but will it work? Kerry wants to take Cain to court for sacking Dan. Pearl is tipsy after her veterinary do and soon April is terrified Pearl could be a werewolf, which Gabby is happy to fuel. David impresses Lachlan. 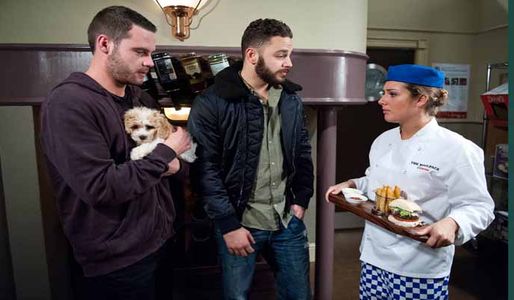