Paddy attempts to steer Aaron away from Robert but his plan is ruined, resulting in Robert and Aaron being left together alone. The attraction’s still there between them. Paddy warns Aaron he should stay away from Robert but when Robert suggests a drink Aaron defiantly agrees. Later, the sexual tension is bubbling as Robert and Aaron flirt and end up kissing, lost in their passion. Paddy is shocked when he turns up and finds them together. Later, a frustrated Paddy puts a plan into action as he writes a letter to Chrissie. Later, Robert unwittingly hands her the letter. She reads ‘Rein your cheating husband in’... (She doesn’t show Robert what she has just read).

A determined Brenda sets off to the hospital with Chas, steeling herself for what’s to come and terrified for her scan. Soon Brenda’s relieved to have been given the all clear, but is shocked to see Bob has arrived at the hospital and Chas admits to having called him. Bob hugs Brenda tightly, overcome with gratitude and relief, as he struggles with his guilt.

Dan been re-writing his essay for college, Kerry’s sure she can do hers in her lunch hour. Later Joanie and Kerry argue over what is best for Kyle. Rakesh questions why Kirin can’t stay away from Vanessa, Priya explains it’s called ‘love’. Carly’s annoyed to get another plumbing bill telling Bob they need more money. 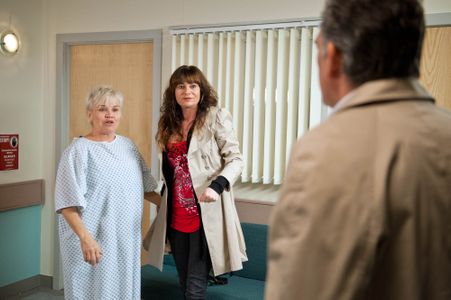