Emmerdale 08/10 - Amy panics as Kyle falls into the river

Val and Amy feel guilty about Eric but Amy's hopeful they can get Joanie back on side. Joanie does soften and they all take Kyle to the river. As Val makes awkward conversation with Joanie, Amy plays with Kyle. But things take a nasty turn when Kyle falls into the river. Amy jumps in to save him, injuring her knee. Joanie calls an ambulance as a terrified Amy cradles her unmoving son.

Elsewhere, much to Vanessa and Marlon’s frustration, Paddy decides it's time he told Rhona it's over. Later, he reluctantly agrees to let Chas join him for a run and the pair make peace and suggest a day out together.

Paddy and Chas are relaxing and having fun at bowling, when he gets a shock as Rhona walks in. Passy won't talk to Rhona so Chas decides to takes things into her own hands and sends Rhona over to Paddy.

Also, Ashley apologises to Edna and she advises him to stay away from Laurel and concentrate on his calling from God instead.

Meanwhile, Marlon and Laurel receive the divorce papers from Ashley. But Marlon can't believe it when Ashley tells them he wants to take their wedding service. 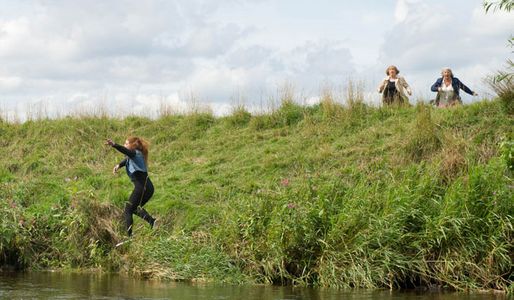