Laurel’s upset Ashley wants day-care rather than her. Whilst Gabby is drinking away her upset as she and Liv are on a mission to get steaming drunk at the cricket pavilion. At the hut, Liv dares Gabby and Liv videos her antics and promptly posts the video online. Later, Laurel is perturbed when Tracy shows her the video. But matters take a turn for the worse when after having been found being sick, Gabby suddenly collapses and is rushed to hospital.

Pete feels guilty and encourages Finn to find Kasim and explain. Whilst Emma tracks Kasim down herself.

Rhona probes Paddy’s feelings for Chas and later sets them up on a date in order to get them to talk but will it work? Lisa’s surprised to learn Zak and Joanie are moving to Leeds. Later, Charity turns up to cheer Belle up and Lisa probes her about Zak moving.

At the hospital, the doctor tells a relieved Laurel,Gabby will be alright. But soon it all goes wrong for Laurel and Ashley when Ashley in a confused state accidentally hits Laurel after arguing with her. Laurel is distraught. Ashley bursts into tears when he realises what he’s done. Later on Main Street, Laurel, Gabby and Ashley return during theChristmas lights switch on at the village. Bernice is shocked to see the state of them. Later, after such a rough day, Laurel makes a decision over Ashley’s on-going care.

When an upset Belle comes across Liv hiding she takes her under her wing and warns her to delete the video of Gabby. Liv pretends nonchalance but secretly worries about the fallout. Later, Liv’s contrite when she learns Gabby went to hospital and apologises. Robert suggests it will blow over but Aaron’s not so sure. Later once Bernice has comforted Gabby and sent her to bed she picks up the phone to take matters further.

Emma encourages Finn and Kasim to talk. Can Finn make it up to Kasim? Lisa urges Joanie and Zak not to leave.. Chas suggests she and Paddy go for a boozy lunch, skiving off from work.​​​​​ 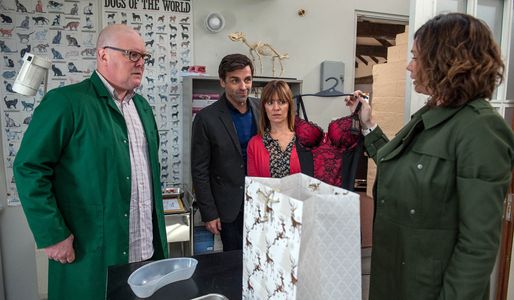