Jealous Emma tries to trap James into coming clean over Chas but he then realises the boys have let slip about the plan. In the surgery, Emma manipulates Dr Bailey into giving her the afternoon off. When Emma arrives at the Woolpack, she seethes to see James chatting with Chas and fakes a funny turn,stumbling. James is concerned and Pete reveals Emma hasn’t been well. Back at DaleView, Emma tries to soothe James’ concerns, but he remains worried. He goes to theSurgery to find out the truth but will he get it from Doctor Bailey?

When Ronnie struggles with a digger outside Mill, Lawrence helps and they later share a drink. Could there be a slight thawing as the two men reminisce? David is defensive clearly struggling with his new look. In her bedroom,Chas wakes from a nightmare. Later, Chas lies awake terrified and close to tears.​ 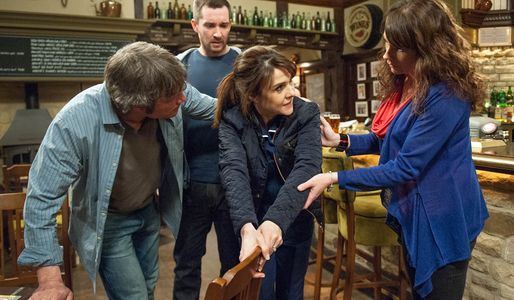