Joanie is excited to collect her wedding dress but Belle is ashamed when the stain is discovered. Aaron and Charity are hostile about Zak’s stag do and Lisa cries on Chas’ shoulder confessing she still loves Zak. Drunk Zak staggers home from his stag and Joanie comes to his rescue by pulling him out of a bush but is shocked when Zak accidentally calls her Lisa. Belle is taunted by Ellie who tells her Joanie’s the root of the problems.

Emma andJames announce they’re thinking of buying Wylie’s Farm. Emma’s excited, but there’s a sense James is hiding misgivings. Pierce is suspicious when he overhears Rakesh telling Emma it’s taking time to pay back their deposit and soon Ross is tackling Rakesh over the injustice with violence and a tyre wrench. Pierce sides with James and soon Rakesh is stunned when they tell him he has just 48 hours to return the deposit or they’re taking him to court over the money.

Chrissie urges Lachlan to go see Lawrence in hospital to make up with him. James antagonises Cain. Charity tries to seduce Cain but he pushes her away and she’s crushed. 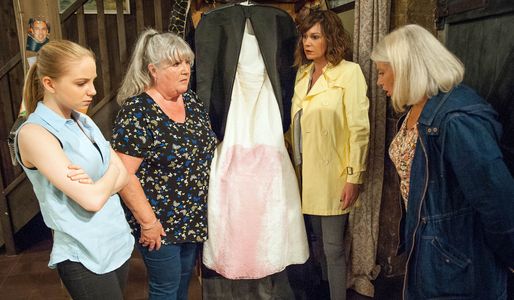