Emmerdale 08/9 - The Search For Belle Is Called Off

James begs Ross not to tell Emma about him and Moira. Later, James is shocked when Moira tells him she’s going to sell up and move away.As he urges her to think about her decision Holly arrives, pleased about her new job. But is soon aghast to hear her mum’s planning to sell. James is irritated by Emma’s lack of sensitivity about Moira selling up. Emma wants to celebrate but James walks out, leaving her bemused. At Butler’s, James tells Moira he loves her and she’s left reeling.

Bailey and Lisa are united in worry for Belle. Later,Zak and Lisa are aghast to learn the search for Belle is being scaled back, fearing the police are giving up.

Priya announces she’s bought Rakesh a ticket to Lahore with her savings and is shocked when he’s furious. Can things get any worse between them?

David plans Tracy’s birthday and asks her to marry him again. Zak and Joanie make themselves scarce as Kerry plans a special breakfast for Dan. Nicola hopes Jimmy is starting to thaw.

On the streets, Ellie forces Belle to throw away a leaflet with Bailey’s number, insisting everyone hates her. Meanwhile, the Dingles plan to redouble their search to try and makeup for the police operation being scaled back. A starving Belle searches for food. When Lisa and Chas hand out missing flyers, they talk to the girl who passed Belle earlier. Their photo looks nothing like her now, however, and they’re left unaware how close they came and soon Lisa makes a decision. Later, after picking through scraps outside a fast food place a desperate Belle huddles down to sleep. Some revelers steal her sleeping bag, leaving her unprotected against the cold.

Moira reels from James’ declaration and tells him there’s nothing between them. Later, Emma’s anxiety starts to rise whenJames tells her they need to slow down and he teeters on the edge of telling Emma everything – will he?

Banter between Jimmy and Nicola soon results in a passionate make up. Rakesh is shocked when Priya asks if she repulses him. Later her bulimia is apparent. In an attempt to be different from Vanessa, Tracy dyes her hair red and David’s shocked.​​​ 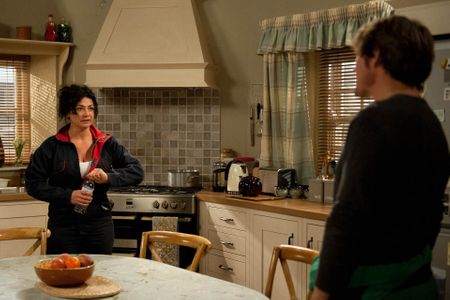