Chas has unknowingly survived Robert’s initial plan to kill her. And is soon filling in Paddy on Aaron and Robert’s rekindled affair. Chas’s plan is still to tell Chrissie everything. Meanwhile, with Chas’ threat still looming Robert makes a phone call to a very shady contact, explaining, he needs to get rid of someone, permanently, straight away. Later, reluctantly Chas tells Robert she will keep the secret but only for Aaron’s sake. Robert makes a hasty phone call to retract his instructions, but despairs as he cannot get in touch with his contact...

Alicia wants to go to court despite David’s misgivings. Chrissie lies to Lachlan about his dad Donny not being able to come to court. Will Alicia be strong enough to get through the day as the verdict is delivered?

Priya continues to matchmaker her parents but the day takes a different turn at the factory open day despite Rishi having booked a dinner table. Lisa tells Sam not to tell Rachel they are visiting Charity. James continues to be confused by Paddy and Chas’s relationship.

Alicia tries to put on a brave face but can’t keep it up when Leyla comforts her. Alicia tells David and Leyla what Lachlan said to her outside court and David struggles to contain his anger. David worries about Alicia’s state of mind. Later, distressed by her fears, Alicia loses it when Jacob receives an overly suggestive and sexy email and makes a rash decision.

Knowing Chas’s time could almost be up, Robert is panicked he still can’t get in touch with his contact to call him off. Meanwhile we see the man staking out Chas, poised and ready to strike. When Chas hears a car alarm going off, she heads outside to see what has caused it, unknowingly into the trap set.

Rachel overhears Sam talking about Lisa going to see Charity but when she realises they are all lying to her over it she gets angry.

As the open day continues, will Rishi finally be honest with Georgia about how he feels? James, Pete and Emma offer to run in the charity run but Emma unimpressed with James and Chas’ cosiness. 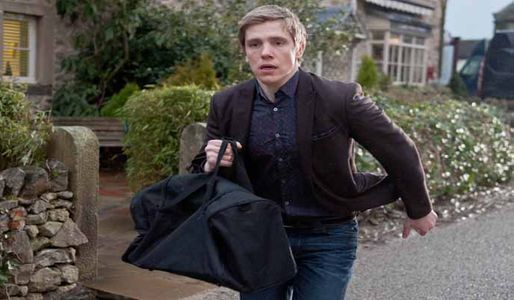