Emmerdale 09/07 - Angry Robert takes out his revenge on Paddy, leaving him to die

With the note on her mind, Chrissie scrolls through Robert’s phone but is caught when he walks in, so she shows him the note. Fuming, Robert explains it’s a pathetic joke and heads out, with a good idea who sent it. Approaching Aaron, Robert accuses him of sending the note. But Lawrence comes over, interrupting and asks Robert to be director of the business. Later, Robert’s suspicions are confirmed when he sees Paddy and Aaron arguing. Robert confronts Paddy warning him to back off. Later, at the farm Paddy has just rescued a calf and is climbing out of a grain pit when slips back off the ladder hurting his leg, he calls out for help but Andy doesn’t hear. A menacing Robert is lurking and seeing Paddy trapped, unseen flicks the grain auger on. As the grain starts to flow, filling up the pit with Paddy in it, Paddy screams, unheard for help over the noise of the machine. Soon poor desperate Paddy is still stuck in the grain pit, calling out for help, knowing this could end very badly indeed as the grain level continues to rise. Unseen Robert watches on from the shadows. As the grain gets higher Paddy attempts to climb out, but falls banging his head and knocking himself unconscious. The grain is now covering his unconscious body. Robert peers over, in some way thrilled but also worried. Elsewhere, Marlon’s frustrated Paddy has stood him up and Chas worries something is wrong….

When Vanessa has wrongly assumed the money was from her father. And is about to go and visit him but faltering. Kirin realises something is wrong and Vanessa confesses she thinks the money has been sent by her father. Meanwhile, Priya explains to Rakesh she is not happy with the situation but she’s accepting it. Vanessa isn’t ready to face her father and when Kirin explains Rakesh feels guilty.

Rodney returns home from Amsterdam with an X rated gift for Jimmy which backfires! Dan argues with Kerry over her college course commitment and whilst they row, Kyle wanders off. Carly’s plumber won’t start work without payment. Unable to pay, the workmen pack up to leave. Lawrence has a proposition for Robert not only to be a director of the business but he’s put him in his will.

Rodney questions how Nicola will react when she finds out the full story on Tracy. Jimmy is
adamant she won’t. Later Rodney queries Jimmy’s feelings for Tracy. Carly spots Lawrence’s advert. 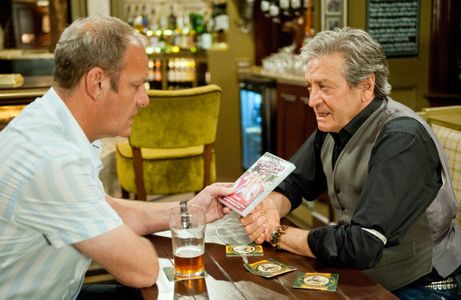 Eastenders 09/07 - Angry Robert takes out his revenge on Paddy, leaving him to die