Belle seems determined to carry on as normal as the family discuss who might have damaged her painting. She plugs in her headphones and heads out and soon ends up in the woods. Belle dials the number for her new school and starts shouting abuse telling the person on the other end she is never going back to their school. Later Belle steals a bottle of vodka and goes on an angry rampage in David’s shop. Meanwhile Lachlan is warned to stay away from Belle by his mother, but he can’t resist snapping what he sees going on his camera. Later with her parents inside worrying how to help their daughter, Belle is out feeding the family pig Hamish and at last the reasons for her recent behaviour start to become apparent.

The gossip hits the village Harriet has lost her job as vicar and Brenda wants to start a petition to save it. Ashley gets in a bind when he fails to admit to Harriet he has been offered it. The timing is bad when he eventually does come clean and Harriet is upset. Later Harriet overhears Ashley’s true wishes and they come to an agreement.

Bernice and Nicola’s health kick starts well but ends badly when a plate of nachos leads them both astray. Pollard plants the germ of an idea in David’s mind. 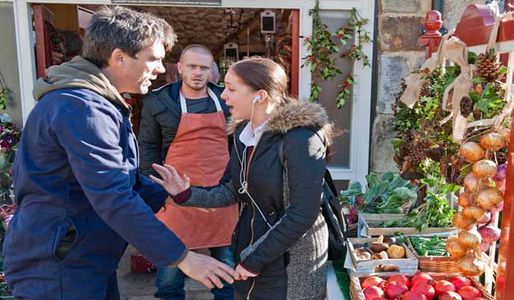