Laurel’s determined to manage without day care. However, her stress increases when a visit from Bernice flusters Ashley. Sandy insists Laurel have a break which she gratefully accepts, leaving Sandy to look after Ashley and Dotty.Soon Laurel is unwinding with Nicola but her mood is dampened when she returns home to find a bewildered Ashley outside in his pyjamas. Laurel’s day goes from bad to worse as she struggles to cope and Ashley is almost knocked down when he steps in front of Diane’s car. At her wits end,Laurel lies to a confused Ashley it’s time for bed, and puts him to bed early, but Ashley becomes distressed…

Chas is unnerved when a police officer and social worker arrive to speak to Aaron. Liv’s defensive and unrepentant. Despite a police warning.Chas agrees with Bernice that Liv needs sorting out, but Bernice threatens to get her alcohol license revoked for supplying her with the booze. Furious, Chas makes a decision.

Moira puts on a brave face that Hannah’s not coming back for Christmas. Later, Emma comforts her but Zak’s unimpressed at Emma’s interference in Moira’s life. Cain’s worried Emma wants to take the farm and Zak’s determined to make sure that doesn’t happen. Pollard wants what he’s owed from Frank but will he get it? Later, Leyla’s anxious to see Frank teaching Jacob a card con trick.​​ 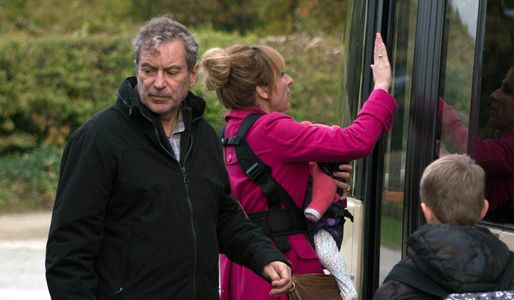