Finn, Pete and Ross are outraged to now know Emma faked her illness and she is shocked when none of them object to her leaving. Emma leaves under a cloud, but her nursing instincts kick in when she sees Chas in distress and helps get her into a mental health clinic. Meanwhile James is having doubts about Emma leaving, will he do something about it?

Charity is shocked to find the Woolpack has been trashed in the night but Chas stops her phoning the police, suspecting it could have been her, thinking her PTSD is back. Chas panics and runs off. She meets Emma outside, and insists she needs to go to hospital. Later, Charity grudgingly admits Emma came through but is Emma as helpful as she thinks?

Nicola fishes for details after walking in on Bernice and Lawrence in the bedroom.Will she get the intimate details and is Bernice as happy as she makes out? Zak and Lisa both receive their decree absolutes. Moira is relieved when Holly passes another urine test. Holly seems determined to stay clean from drugs and Moira is starting to trust her again​​ 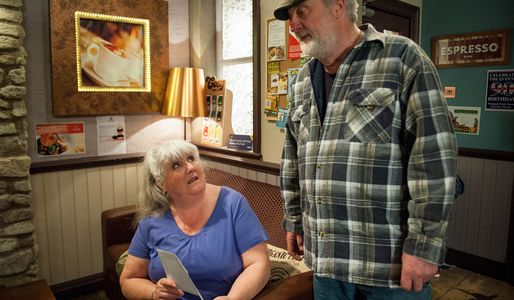