Diane tells Bernice, Chrissie's been arrested for attempted murder. Chas is feeling bad about her role in the arrest. At the station, Rakesh tells Chrissie she doesn't need to worry as long as she has nothing to hide. But Chrissie is scared she's the chief suspect in an attempted murder enquiry and soon further evidence places her near the scene of the crime. As Chrissie falters under questioning, things aren't looking good for her. Lawrence knows Pollard has done it out of spite because of the helicopter crash and lunges at him but Pollard leaves triumphantly. David's angry with Pollard warning him he could be in trouble for perverting the course of justice. He is gutted to realise how heartless Pollard has become. Will David get through to his dad? Lawrence visits Pollard threatening to dig up his past if he doesn't retract his statement. Bernice is worried about Lawrence who takes her into his confidence when he tells her what happened to him in prison. He couldn't bear the thought of Chrissie being locked up. But what will Lawrence do to protect his daughter?

Aaron struggles to hide his panic when he hears the scrap isn't going to be collected soon. Chas later warns Aaron if he isn't telling the truth he won't be able to live with himself and he seems troubled by this.

Zak is determined to get Cain to recognise Kyle in his life. But later when there is a near accident involving Kyle and a car, Cain leaps to Kyle’s defence. Moira takes it as a good sign and she makes it clear she wants to have a relationship with Kyle. Cain is annoyed by the manipulation but will Cain ever recognise Kyle as his own?

Megan's keen to formally dissolve the company and leave the village as soon as possible. But an unannounced visit rattles her, still determined to keep her pregnancy a secret from Jai. Belle asks Debbie for relationship advice. 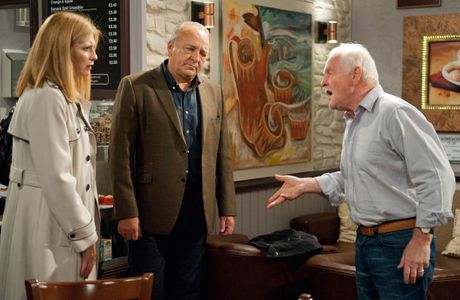