Pollard can’t deny he finds it difficult that Val has HIV and Val’s upset when he refuses to show her any physical attention. A hurt Val turns on Diane but is caught off guard when Diane tells her Eric still loves her and just needs time. Is Val prepared to wait?

Belle’s thrown when Lisa tells her they’re going away, even though Belle doesn’t want to miss Gemma’s funeral. Zak support Lisa as he’s unaware she’s keeping the full story from him. What will Sean think about Belle’s trip away?

Debbie is conflicted about her feelings towards Pete, but she is ready to give him a chance when she goes to Butlers farm. However, Pete questions her mixed signals and it’s not long before Debbie changes her mind. When it’s Pete’s turn to known on Debbie’s door, will they finally sort things out?
​
Elsewhere, Finn’s edgy as he sense Charity knows he fancies Declan, but Declan wants to take advantage of it. Paddy is panicked to learn that the pigs are being sent to the abattoir. 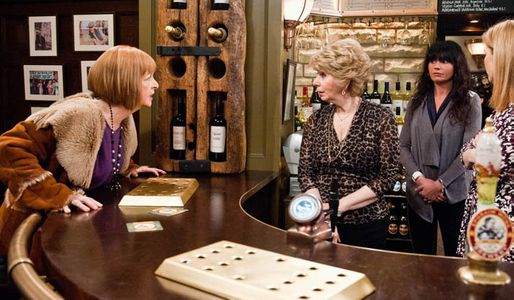