As Belle’s trial begins, Dom soon storms into the courtroom, declaring Belle didn’t mean to kill his daughter and he finally forgives her. His outburst only makes things worse as the prosecution ask for manslaughter to be added to the indictment, making a prison sentence still an option. Belle takes a risk and pleads not guilty. With the verdict in, what does the future hold for the young Dingle?

Kerry drums up publicity for the salon, aware she is still on her trial. The villagers arrive to show their support and Dan bags himself the golden ticket and a free spray tan but hastily passes up the opportunity and gives it to Andy. Curious as to what is taking so long, Kerry opens the door and the visitors get more than they bargained for when they find both Bernice and Andy in a state of undress.

Priya is left alone with a crying Amba, struggling she rings David for support who jumps at the offer. Exhausted Priya leaves the two of them alone as she goes upstairs to relax but listens as David talks to Amba and cradles her to sleep. Priya puts David’s phone on silent when she sees him asleep with the baby. Later, Alicia gives David the cold shoulder, and tells him the arrangement won’t work if Priya still has feelings for him, forcing him to acknowledge she does.

Donna gets April ready for her sports days, knowing it will be the last one she attends.

Harriet confides in Kerry about her kiss with Ashley. Later, they agree it was a mistake, though both are clearly disappointed. 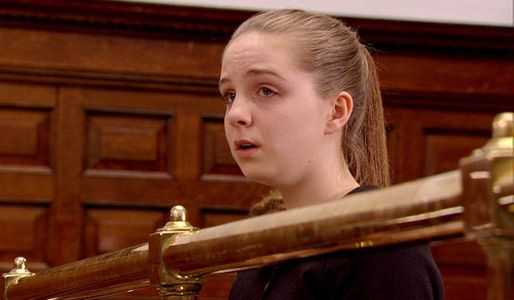