Marlon continues to probe what is really going on with Donna, questioning Rhona, aware she is hiding something. Taking matters into his own hands, he decides to look in Donna’s room. Close to discovering Ross’s wallet, which he dropped the night before, he comes across Donna’s memory box for April and a box of medication, the slow realisation of the truth setting in.

Adam’s problems escalate when Andy kicks him out making him homeless. Without the support of his family, Adam quits his job and leaves the farm. Katie tries to make Andy see sense but he is adamant someone must pay for what he’s going through. Meanwhile, Moira is frustrated by the lack of support from Cain, suggesting she may be better off on her own.
​
Zak arrives at the Brook to fix a window but once Sam is out of earshot, he warns Tracy she won’t get a penny from Sam. Sneaking £10 from Robbie’s jacket, she gives it to Zak for his hard work, aware of his hostility. Zak leaves, telling Robbie to keep an eye on her, wanting to know anything that goes on.

Leyla and Megan’s business plans are slow starting as they struggle to come up with a company name but soon find a potential client in Laurel. Daz seems very busy on the phone to ‘clients’ but is all, as it seems?

Marlon struggles to accept Donna’s revelation as she explains she has a kind of lung cancer. She tells him their wedding was the best day of her life and has told April about it in her letter. Marlon takes the news badly as Donna tells him April will soon need Laurel as a mother. Meanwhile Rhona ushers Laurel to the café, aware Donna and Marlon have a lot to talk about. As Marlon and Donna cling to each other in tears.

Andy is unwell because of his arm. Cain tells him that he is making a mistake getting legal help and advices Andy to drop the legal proceedings, as Moira cannot afford to pay him. He offers him a deal; a lump sum and his job kept open.

At David’s Shop someone breaks the lock and sneaks inside. Alicia screams when a masked man exits the shop and knocks her flying. Dan calls across to Daz to stop him. In the street Daz heroically catches the robber but the man escapes after Daz is punched. Later, Alicia is struggling emotionally after the robbery as Zak explains to Daz she got shot last year.

Zak doesn’t know what to make of Sam’s girlfriend Tracy. Robbie questions her Tracy over the missing tenner as Sam watches the exchange. Ross is amused as he teases Adam about having nowhere to stay. Adam decides to try his luck with a drunk Leyla. 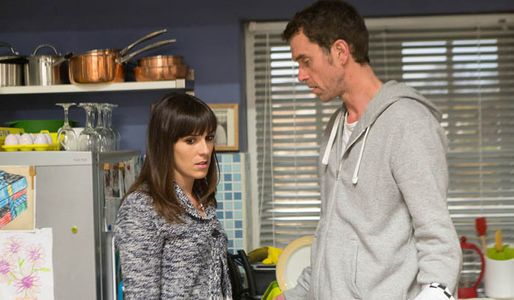