Ross goads Adam about Victoria. Victoria tries to keep them apart but in a scuffle is pushed hard to the ground. She cries out in pain and Adam, Finn and Aaron drive her to the hospital. At the hospital, Victoria tells a shocked Adam she might be pregnant.

Belle returns and is disturbed by Kyle’s obvious fear of her and tries to put him at ease. Later, Zak shouts at Kyle and Amelia for putting on metal hats to protect them from Belle’s voices. Belle explains it was helping Kyle relax; however Zak feels bad.Later, Belle tells Zak off for shouting at Kyle and Amelia. Belle insists Zak has to be honest with her so she can face the truth but is left shocked by his confession.

Diane’s ears prick to learn there’s a PR event at the Home Farm adventure course. Later that day, Diane, Rodney and Doug wave placards outside the gates of Home Farm,urging the guests not to go in. Lawrence warns them to leave.

Rakesh gives Nicola and Jimmy compensation and Nicola’s eager to spend it on a holiday.

Adam is adamant Victoria can’t be pregnant. She goes to get a sample for the test leaving him tense. Adam reassures her they’ll face the outcome of the pregnancy test together. Out in the hallway, Victoria confides to Finn she wants to have a baby but isn’t sure ifAdam does. What will the test reveal?

Belle has a go at Zak. He insists he’s happy with Joanie and begs her to forget what he’s told her. Belle agrees not to tell Joanie but insists she can’t live there anymore. Joanie’s thrown to learn Belle’s moving back to Wishing Well.

At the hospital, Aaron is thrown when Finn reveals he’s been visiting Kasim. Aaron warns Finn he knows nothing about this man and that he should leave him alone. Finn feigns agreement but will he listen to his friend’s advice?

A rock flies through the window at Home Farm, narrowly missing Lachlan. Is Diane really responsible?​​​​​​​ 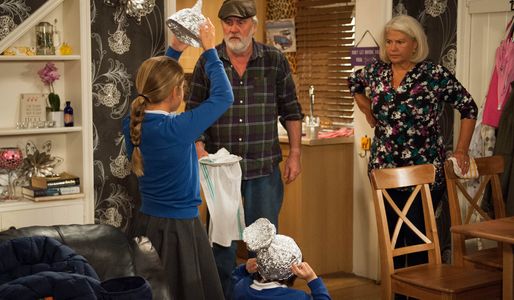