Zak and Lisa are very worried about Belle and horrified to realise someone has reported her, when her Youth Offenders Officer Pamela arrives. Pamela states she’s had a report of Belle going against her licence. Zak and Lisa try to cover for Belle but she admits to the officer she did smash up the shop. Pamela allows Belle to remain at home but insists she sticks to her terms and Zak thinks some counselling would be a good idea. Later, Lachlan tells Belle he knows it was her that put the paint cans in his bag. Later,when alone at Gemma’s shrine, Belle is pushed to the brink and Edna approaches unaware how Belle is feeling.

Nicola’s hungover and Jimmy gets his own back as he cooks bacon for himself teasing Nicola she’s on a health kick. He puts a healthy smoothie in front of her and she runs off to be sick. Later, a penny drops for Nicola as she heads off to get confirmation. Nicola is soon left in no doubt after doing lots of pregnancy tests and is delighted to find out she is pregnant, she and Bernice rush to the pub to tell Jimmy.

Sandy and Edna take presents over to Ashley, as it’s his first day as the vicar again. But Harriet fears about her future career.

David is putting up posters up for a lads football team. Later, Amelia, Sarah and Gabby accuse David of being sexist because of the poster being directed at boys. Val’s furious Doug is more famous than her when he’s asked to turn on the Morley Christmas lights and takes Diane as his guest. 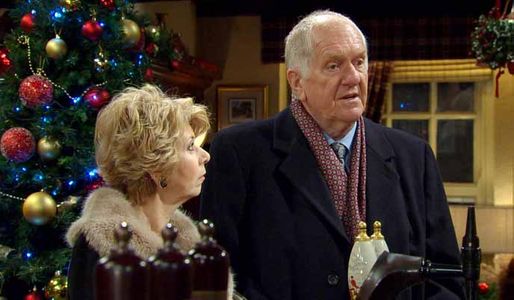