Kirin's relieved when Carly returns with Johnny. She reluctantly hands him back but is unconvinced when he says nothing will happen again. Later, Leyla collapses and Carly sees the ambulance that has come for her and immediately gets the wrong impression – she accuses Kirin of harming Johnny, leaving Vanessa baffled...

Chas updates Paddy and Rhona on Aaron, telling them he's gone away for a while. Tess opens up to Rhona about a married man she's been seeing and Rhona advises her to do what makes her happy. How will Paddy react when Rhona tells him Tess' plans to move to the village and has had an affair with a married man?

Chas refuses to tell Robert where Aaron is but she's taken aback by his genuine emotion and concern for her son.

Gabby's intrigued when she discovers an online video of Kerry and Dan doing role-play. A horrified Bernice discovers the sex video and tells Gabby to delete it, however, Gabby shares it instead. Delirious Leyla tells Nikhil they should get married. 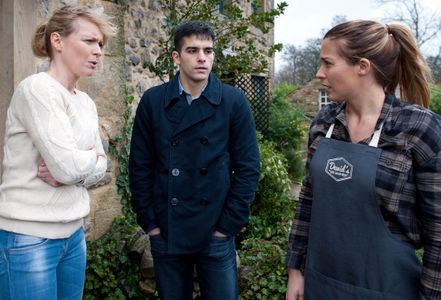